How to use Chicken Manure in your Garden for Fertilizer

Growing up in Central Florida, I was fortunate to have good year-round growing conditions. My grandparents were avid gardeners, and I remember the big jar painted white sitting on the counter to collect food for the compost pile. Once it was filled, my granddad would take it out to the compost bin and turn in, creating a rich soil. Although he composted, I was not introduced to chicken poop fertilizer until I was much older.

I was lucky to grow up with an awareness of composting, and… Continue

Growin bags of strawberries are coming up wonderfully!

I am happy to say that they are all taking nicely and coming up really well. They are on week 1 in the growin bag. Then instructions say to leave them laying flat for 2 weeks.

When was the last time you thought about gardening and growing your own food and live a sustainable lifestyle in the city? What if you could only eat what you grow - or at least primarily - how efficient and or creative would you become to thrive with Lunch in a Box or…
Continue

Little Garden Boy Share About Dinner in a Box 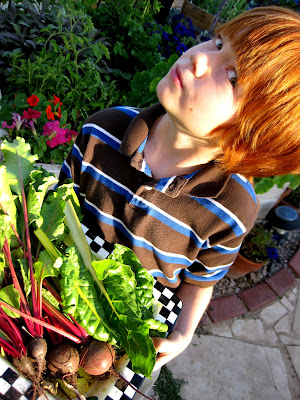 I fill the bottle with water in the shower. Give it a good shake, and apply to the roots. Massage it in, and rinse out.

In the spray bottle, "conditioner" : 1 Tbsp of ACV per cup of water, plus a few drops of essential oil (I used hyacinth). I store it in the fridge.

Spray it on the ends. Let it sit for a few minutes, and… Continue

Finding a Permi Home in the Valley

I'm new to Phoenix and now that I've sold my house in IN, I hope to buy in next few months. I'm looking for tips from folks who've been around awhile and know the 'pulse' of the Valley. Areas to avoid or consider inside the 101, probably more Central - with or without flood irrigation. A quiet haven , under 170,000.
Name of honest, like-minded realitor, would be great also.
Thanks all.

The sub-title of this online community says "join us in creating a more sustainable phoenix!" I am taken back by this. sustainability is an incredible complicated and hard thing to imagine. Let alone actually create. And I ask myself, Can you make something 'more sustainable' ? Either it is sustainable or dependent upon something external for its survival. Ultimately any system will fail if it isn't fully sustainable.

Hi Permies! I was wondering if anyone in our network was a nutritionist or has special training in how we burn calories and digest food. Please contact me via email.
Thanks,
Rachel

How to build an Herb Spiral Phenomenal example of an Herb Spiral at Joan Baron's home

Hi All, I have been asked by many people (most recently Martha last night) about herb spirals. They are a beautiful and productive use of space for the home permaculturalist. I wanted to share some resources that I have seen with you all in the hope that you will feel empowered to go ahead and start using all that Urbanite!…

Watching the discovery green echo channell. What are we doing to reduce our echo foot print?

What are we doing to go green to reduce our carbon foot print.

I will start off with my own family.
I only run the dishwasher in the off peak hours, and if I have a full dishwasher.
Keep lights off, and use natural light as much as possible.
We plan our trips to be done in one day for errands.
We have one vehicle, and maintain it to keep it current for emissions it puts out.
Recycle grocery store bags for collecting trash, and picking up dog poop.
Low E… Continue

Celebrate Earth Day with Quiessence and the Farm at South Mountain as the Q present a very special vegetarian Earth Dinner & Farm Tour. Discover the merits of sustainable farming right at the source as you stroll through our organic gardens and scenic property.

Monday I had a doctor's appt mid-day, so I just took the whole day off.

6:00 am
First thing, I hit the gym. When I got home, I folded the bread dough that I had prepared the night before, and hit the showers.

8:00 am
All sparkly clean, I did some graphic design work, and then pre-heated the oven. I finished the baking and MM MM it smelled good.

I'm not much of a baker, but the… Continue

I'm very happy to report I have tons of praying mantis on my plants. They are so cute!

Lunch in a Box

Lately, I've been saying "Lunch in a Box" meaning that out in one of our garden "boxes" there is food to be harvested for lunch or dinner. I like thinking of it that way - and today, I harvested probably the last of…
Continue

I live out in the east valley and wonder if there is any interest in starting a permie group for those of us in this area? Anyone who has started other valley permie groups - feel free to respond with helpful tips. If there is a group already formed, I would be interested in learning more.

I know it's a little late in the spring but I finally got that hole dug. It's an infiltration basin.
About six inches under the soil level I found a layer of concrete 1-2 inches thick, which explains why nothing was growing. (cuss cuss profanity) A few weeks of digging later (yeah I'm slow I have fibromyalgia) and I have a concrete free basin about 9 feet across. I fill with mulch, divert wash water, and have nothing to plant except all the seeds I've had for a year waiting for this magic… Continue

Success with Native bees and my Bee Block!

I made a bee hotel out of a block of wood and put it up on my bird cage outside. Weeks ago I noticed little wax plugs, like green wax, plugging up the hotel doors. Days ago I noticed the wax plugs missing. Today my neighbor says he saw some odd looking bees he's never seen before pollinating his grapes! Now he says he will have grapes off this plant for the first time in two years, looks like the mini grapes are already forming. He's excited, looks like I got another native bee fan!

How to Hatch Fertile Chicken Eggs in an Incubator

Just set the temperature to the setting usually to optimum, then the… Continue

My container Eggplant is taking off finally!

I have about 4 eggplants on the grow! I am just so supprised. I picked the one I had finally, and it has decided to take off. I had 3 flowers that were fertilized, and they are growing big eggplants! It has more flowers on, and I am hoping that they take as well.