My cantelope and regular cucumber are getting their 3rd & 4th leaves. I'm thrilled! None have died. They love the warmer days.
I put my patty pan squash in actual containers today. I'm gonna give them an opportunity to get more adult leaves on them before I put them in their homes.
In my seedlin incubator I have my bush sugar baby watermelon, bell pepper, black beauty eggplant, pickling cucumber, kentucky wonder pole beans.

My / Our Earth Hour

Partook in Earth Hour by spending a relaxing quiet night at home.
Put together a solar system puzzle and played some cards.…
Continue

Quiessence on the Farm at South Mountain partaking in Earth Hour! From melting glaciers to increasingly intense weather patterns, we know that climate change is already impacting life on our planet.

taste of produce so far is absolutely yummyy!!!!!

I tasted some chives, lettuce, carrots, and they are just yummyyyy. I'm just amazed that I'm able to grow this stuff in containers and it tastes so good!!!

more seedlings are up!

so, Erika just turned me onto an awesome source for ReMesh! although they don't have the 4"x4" material, they DO have 6"x6", which gives more of an open feel to the trellises when nothing is growing on them. so, here's the source...

Interesting stuff. I is the derivative to citranella. How cool. I believe we will get rid of any mosquitos this summer on the balconies. I plan to split the plant and have a container in the front and one in the back.

How to Make Shepherds Pie

How to make Shepherd's Pie:

I received an email from Danielle of Indiana where she wrote, "Where did you get your buckets and what all are you storing in your year long pantry? I'm trying to build toward something like this....…

I received an email from Danielle of Indiana where she wrote, "Where did you get your buckets and what all are you storing in your year long pantry? I'm trying to build toward something like this...."

Being very excited about this process and loving to share my philosophy with interested women, I emailed Danielle back asking for her phone number so I could talk with her. We had a delightful 30+ minute chat. I explained why I'm doing what I'm… Continue

Pressure cookers and canners date back to 1679 where Denis Papin, a French physicist and mathematician designed this large cast iron pot with a locking lid. His invention raised "the boiling point of water and at this higher temperature, bones softened and meat cooked in quick time."

writing ideas for reports on composting

My 7th grade Language Arts students will begin studying report writing next. I am looking for suggestions of possible report topic ideas.
So far this year, I have centered all of my teaching units around composting.
* For summary, they read articles on composting and wrote a summary.
* For persuasive essay, they wrote to our principal, the cafeteria manager, and the maintenance manager, to convince them to allow us to have a compost pile on campus.
* For our functional… Continue

How We Got Started In Gardening - 1 Year Ago I love to cook and I thought it would be fun to have a few younger moms over and cook dinner together. So, today, I invited BreAnna, Molly and daughter Candace to join me in the kitchen for some good ole' fashion home town cookin'. And, they did. Comfort food was on my mind and therefore we chopped, diced, chased children, stirred, whisked, rolled, cut, laughed and baked Creamy Chicken Potpie with… Continue

Something Else To Do With Chicken Feet

Two dear friends have been encouraging me to add these to my chicken soup. To be honest, I haven't had the stomach to do "it." 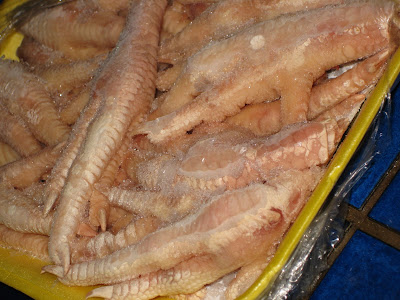 So, since I made roasted chicken last night and I always make broth (for soup) the next day, I decided to brave it and pull these out of the… Continue

Baking Home Made Whole Wheat in the Sun! Part Three

Baking Home Made Whole Wheat in the Sun! Part Two!


Related Posts
1. Baking Bread in the Sun - Part One
2. Save Money - Cook With a Solar… Continue

Baking Home Made Whole Wheat in the Sun! Part One!

I love to make bread and have made about ten loaves since the beginning of February. Today, I made two loaves and used my solar cooker - sun oven to bake the bread. Here's part ONE of my… Continue

Well I have all hot loving plants growing now!

My regular cucumbers and cantelope are all getting their 1st and 2nd mature leaves on them.

Has anyone grown Stevia?

I have several 2" seedlings but have been debating where to plant them. How does it perform in Phoenix? How much sun can it take? Will it thrive in a pot? There is some information on the web but haven't found anything specific for growing in the low desert.

Yesterday, I had a man follow me all the way home on Baseline from about 40th St all the way to 35th Ave. When he stopped, he said immediately, "I'm not trying to stalk you, I promise. I'm a therapist, and when I saw you driving, you looked so happy, you had the biggest smile and just kept it. I thought, wow, she really has something, and I have to know what it is. As a therapist I'm always interested in what makes people happy, and I feel like when you find that happiness, you need to find a… Continue